I got my first dollar yesterday!

The way I’ve been thinking about my campaign for Samaritans is that I want to touch 10,000 lives. I want 10,000 people to learn something about suicide or mental illness. I want 10,000 people to be more comfortable talking about suicide and mental illness. I want 10,000 people to listen and just be there for those around them. The money will come – but that’s not my focus. I told a co-worker that I was running, and he pulled out a dollar to be the first one to make a donation. Thanks Rich! Awesome! Although for some reason, nine thousand nine hundred and ninety-nine sounded like a lot more than 10,000. It was after he gave me the dollar that I told him about my plan to collect $1 from 10,000 people. Fun how the universe listens and responds.

I also got a package in the mail yesterday from Samaritans. A box of cash to make my future task of collecting money easier? Jet pack to boost me up the hills in Boston? 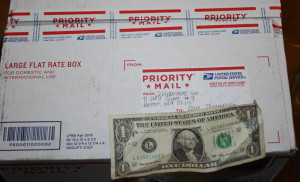 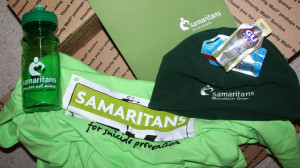 I keep hearing that when people find out I’m running for Samaritans that I’ll start to hear more stories and people will share more with me. So far I’ve basically told my parents, my brother, and my brother-in-law. And with each of them we had at least a 1/2 hour phone conversation. We talked about my sister, Katherine. We talked about suicide. We talked about ideas to make others aware. We talked about life, and family, and parts of this that still (and will always suck), and we talked about hope for today and the future. Being a part of Samaritans is already starting conversations and spreading good energy. And it’s starting with the people that matter most.

Who should you go have an important conversation with?